JavaScript is a single-threaded programming language. Meaning, it can do one thing at a time. Having only one thread avoids a lot of complexity that comes from multithreading. However, if we synchronously do something that will take quite some time, our thread will be blocked for quite some time. Imagine the following pseudocode:

We cannot execute another function until the requested data is returned, which leaves the client frozen. What this means is that if a user clicks the button, then they cannot interact with the web app for 10 seconds.

But JavaScript can only do one thing at a time, so how can we write asynchronous JavaScript code? That's what we'll look at in the following sections:

This section assumes you know, how stacks and queues work. So if you want, you can refresh your memory with a previous article I wrote, called Stack and Queue in Javascript. Anyways, let's get started, in the image below we see how it roughly looks like in the browser. 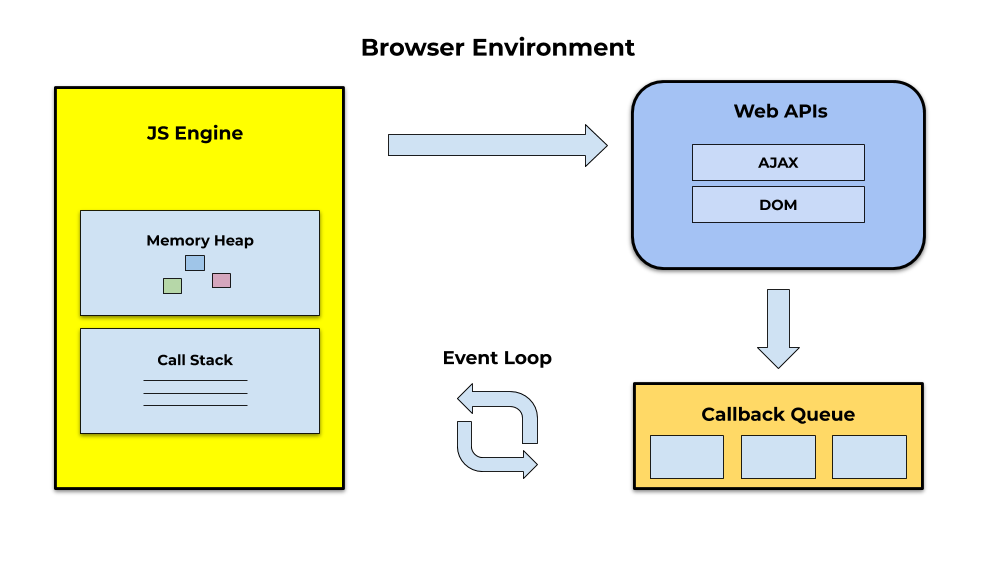 The Engine has two main components, a Call Stack and a Memory Heap. JavaScript is single-threaded and therefore has only one Call Stack. The Memory Heap is where memory allocation occurs.

The Call Stack utilizes a data structure called "stack" to keep track of functions being run. It tracks where it is and where it was, so it knows where it should go back to. More specifically, it tracks what current function is being executed and where to return to. The reason for this is to keep track of execution contexts, which we will not cover here. What we need to know about the Call Stack right now is that we only have one, and can therefore only execute one thing at a time.

Side note: I wrote an article on whether or not JavaScript is interpreted or compiled, which concisely looks more on why we use an engine and how.

APIs can be provided by browsers, Node.js, etc. These APIs are not a part of the JavaScript language, but they are communicated with, via our JavaScript code. For example, if we look at the list of Web APIs at MDN, we can see that the DOM is not in the JS Engine, which also is the case for AJAX and setTimeout.

When we use these APIs, we utilize an event table. The event table keeps track of callbacks for their respective events. Once an event occurs, ie an asynchronous operation is completed, then the callback of that event gets enqueued into the callback queue.

If we focus at JavaScript in browsers, then user actions create events from mouse clicks, scrolling, etc. But an event can also, for example, be a setTimeout like this:

The Callback Queue is also known as, Message Queue or Event Queue (confusing with so many names). With this queue, we have the callbacks from the events all queued up. The functions are waiting to be dequeued and put on the Call Stack.

What is a Callback in JavaScript?

An example of a synchronous approach with a callback:

In the example above we pass the function myName as an argument to hello, followed by calling the myName inside hello before returning hello.

This example is similar to the example in the section APIs & Event Table. By using the words "now" and "later", we execute the setTimeout function now, and the printA function later.

But now when we are aware of the event loop and how we can use callbacks with an asynchronous function. We could instead use a callback like:

Callback Hell (sometimes called pyramid of doom) occurs when we start to nest callbacks like:

Most often, when handling errors for callbacks, we use the "error-first callbacks style" (also known as "Node style"). The first argument is an error if it's not null, an error has then occurred. If the function successfully did as it was supposed to do, then the err will be null.

Imagine error handling, and on top of that, Callback Hell, it quickly gets complex.

What is a Promise in JavaScript?

In JavaScript, a promise is an object that symbolizes the future value of an asynchronous operation. Essentially, it's a promise for a future value, which we can use in our code in a way as if we already had the actual value.

We create a promise with the new keyword, new Promise(executor). A promise takes one argument which must be a function. The executor function itself has two arguments which both are callbacks, resolve and reject. If we succeed, we use resolve(value), if we fail we use reject(error). When we use resolve or reject we change the state of the promise. We create callbacks for each possible state change (triggered by resolve or reject) that will handle the returned value.

A promise may be in one of the following three states:

In the example above, we created a new promise object, which is in the state "pending" because we had neither called resolve or reject. Now in the next example we'll use resolve:

In the example above, the promise changed its state to "fulfilled" after being resolved inside the executor.

Side note: one important thing to know is that once the promise leaves the "pending state" its state cannot be changed again. Such a promise is settled (has become resolved or rejected).

Promise Methods: then, catch, and finally

Promise.prototype.then takes one or two arguments which both are callbacks, I will refer to these callback functions as, onFulfilled and onRejected we can view it as then(onFulfilled, onRejected).

Promise.prototype.catch takes one argument, which is a callback catch(onRejected). According to the ECMAScript spec, this method invokes then(undefined, onRejected) behind the scenes.

Promise.prototype.finally invokes when the promise is settled. This means that it does not matter if the promise gets resolved or rejected, finally will be invoked either case.

then() creates and returns a new promise which allows us to create an asynchronous sequence. This sequence helps us avoid having to use nested callbacks, like:

Instead, we could have done the following with promise chaining:

We briefly covered error handling above. This section will provide a good base for error handling with promises, but there are more things to know about error handling than we'll cover, which also goes for the entire article, do keep that in mind.

Anyways, promises are great, but we must be aware of the following:

What is the problem here? What happens if an error would occur in the onFulfilled function, shouldn't onRejected catch it? The answer is, no, because those callbacks are only invoked when the promise changes state, and in this case, it became fulfilled not rejected.

To avoid our errors going into the abyss, we can use .catch:

A great thing with .catch is that if a promise gets rejected in a chain, then the closest .catch will get invoked:

I saved the analogies for the end, which is quite unusual, but I wanted the text above to be straight to the point. So now you can read these two analogies if you want.